A View from the “Other Side”

Today, 10/9/17, I had my right knee operated on.  Last year it was the left knee.  I actually had this planned, of course, for some time, but since the symptoms were so similar, as was my SwiftPath preop program with Dr. McAllister, I figured the preop part of this blog would be the same.  There were two things that were a little different.  Dr. McAllister insists on attending a joint camp but since I was travelling from New York to Seattle for my surgery, I couldn’t attend but he already had in place for his patients an interactive online JointCamp that was specific for his practice.  Pretty Cool.  Also, even though he saw me in person during a preop visit, he experimented with a teleconferencing approach which worked quite well.

As with the previous operation, I was done as a outpatient.  I arrived at Proliance Eastside SurgiCenter at 6 AM and was checked in at the front desk and brought to the back holding area where my IV was placed and I re-met my anesthesiologist.  It was just a coincidence that I had the same anesthesiologist as last year.  Nice.

Dr. McAllister saw me at about 7 AM, signed my leg, spoke to my wife and me, and then it was off to the operating room.  Next thing I remember was being in the recovery room.

After hitting a few milestones, like speaking clearly, urinating (I tried to find a better word but that is what it is!), and demonstrating I can walk safely with a walker (thank you pre-op PT session), I was wheelchaired to our car and was brought home.

Here is the video of me walking at about 12 noon:

I also started my regimen of Aleve 440 mg twice a day and 1000 mg Tylenol three times a day.  Once again I use a portable home DVT and combo ice machine which I discovered last year called EZ DVT Triple Play (Link 1, Link 2).  It has the compression calf pumps and a compression knee wrap with a cooling feature. 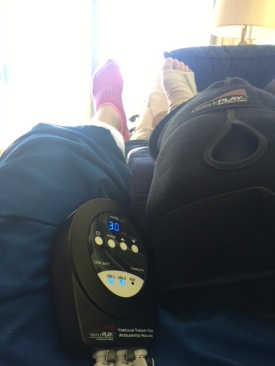 That’s it for now.  Tomorrow I will let you know how the night went…